Roll over topics for links.

An Open Letter to President Obama

Thank you for your service to the nation, sir.

When you ponder recipients for the Medal of Freedom, would you please consider doing a posthumous award to Frederick Douglass, the great abolitionist, orator and leader? (There is precedent for doing posthumous awards.)

Mr. Douglass was one of the greatest Americans ever, and forms a triumvirate of giants of the 19th century along with my other two great heroes, General Grant and President Lincoln. Douglass, as you know, was an escaped slave who became a powerful orator and writer against slavery and other injustices. His three autobiographies and speeches represent some of the most critical thinking of the 19th century and all of American history.

At the 1888 Republican convention, Douglass became the first black man to receive an electoral vote at the 1888 convention (which nominated Benjamin Harrison, who won the election that fall). An elector from Kentucky gave him the vote on the fourth nominating ballot. He was also nominated for vice president on the Liberal Party in 1852 and the Equal Rights Party in 1872. He never campaigned for either office. While flattered to be named as Elizabeth Cady Stanton’s vice president in 1972, Douglass publicly ignored the nomination and instead heartily supported the re-election of my hero Ulysses S. Grant.

Until the end of his life, Mr. Douglass continued to agitate for equality under the law and the right of men to be left to their own devices. As you can see, Mr. Douglass represents the finest of the nation’s proud history.

I would be gratified if you were to posthumously award him the Medal of Freedom. Your friend, Professor Gates, can tell you more, as well could the fine actor Fred Morsell, whose portrayal of Mr. Douglass in 2007 in St. Louis as part of the Dred Scott anniversary sparked my intensive interest in Mr. Douglass.

Thank you for your time and consideration. 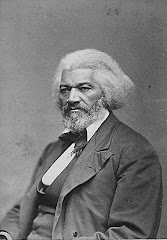 This web site honors the great abolitionist and civil rights leader Frederick Douglass and explores his legacy from his time as a slave to the present day. My ethnic heritage is Scotch, Irish, German and a smattering of Cherokee (verified by my Dad). So, obviously, I’m not black—kinda pinkish-beige with a generous helping of freckles and grey-brown hair. However, I am American, as was Douglass, and he is part of a triumvirate of 19th century heroes, the other two being Abraham Lincoln and Ulysses S. Grant.